Robotory is an endless arcade game, exclusively on iOS, which features a group of Robots who are trying to escape their factory as the floodwaters rise. They must jump through layers of pipes and moving floors while avoiding the drones and electric fences in their way.

Inspired by the classic Jumping Jack game which older gamers will remember from the ZX Spectrum and with some Crossy Road influences and an almost Machinarium graphic style, the game features super simple controls and endless free gameplay which makes it perfect for a pick-up-and-play mobile game.

“It takes some vision and skill to time the jumps through the levels correctly, especially as more obstacles and enemies are introduced the higher you get,” says Finn Krewer, Head of Games at 9th Impact. “Players are competing against their own high score but also can compete for a spot on the leaderboard or share their scores with friends.”

Every few games there is a casino type slot machine which players can spin for the chance to unlock new characters (which they can otherwise purchase) or win golden nuts, which are the game’s currency. The golden nuts are used to revive the robots when they’ve met their end, so you can keep playing although there is a maximum of 3 revives allowed per game.

“Our small team are big fans of classic games and we’re always thinking of ways to make them better suited to the smartphone conditions,” explains Fabio Stara whose official title at the company is MasterChef. “We’re obsessive about the small details in games and spend hours philosophising why things would be happening in the context rather than just inserting random stuff which is often the case in endless runners.”

The first game made by the outfit at the Galway Technology Centre, was called NinjaGo Endless Runner and has been played more than three million times in six months. We featured it on gd.ie last year.

Robotory is now on the App Store. 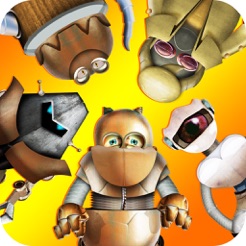